Buy the Fifa 14 for PS4 from Flipkart at competitive price. Also get an opportunity to get the game delivered within a day with the Flipkart In a Day Delivery. The Fifa 14 from EA Sports is its latest addition to the FIFA series of games. EA Sports brings life like experience through this game. All the 22 players on the field react and behave like humans and possess intelligence and react on instincts. The cheering crowd in the venues have been transformed into 3D and behave like real ones which adds the excitement to the gameplay. The stadiums look and feel very real with exact similarity to the existing stadiums. The players’ movements and precision have been given a lot of detailing. Now, the players’ performance on filed has been increased 10 times and they play like the real athletes. The most exciting feature of the game is In-Air play. For the first time, multiple players can attempt to play a ball in mid-air. The player with the most precise movements gets to head the ball. This exciting new PS4 game will keep you glued for hours.

How to buy Fifa 14 for PS4 from Flipkart: 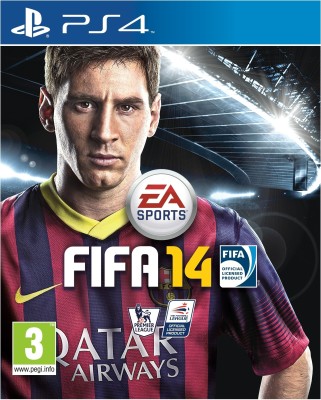