Get the Google Nexus 7 Tablet 2013 Edition from Amazon India at the lowest price of just Rs. 19499. This tablet is very light weight weighing just about 290 grams. You can carry it anywhere you like as it fits right into your bags without occupying much space. An incredibly long lasting battery of 3950mAH which lasts for 9 hours of play time and 10 hours of internet browsing. The 7″ screen is bright and supports full HD playback with a screen resolution of 1920 x 1200 pixels. It runs on the latest Android JellyBean 4.3 Operating System. It is powered with 1.5GHz Qualcomm Snapdragon S4 Pro processor which lets you multitask easily. It has a 2 GB RAM for fast access. The internal memory of 16 GB is quite large. It supports dual-band Wi-Fi and optional 4G LTE. Buy now and save BIG!. 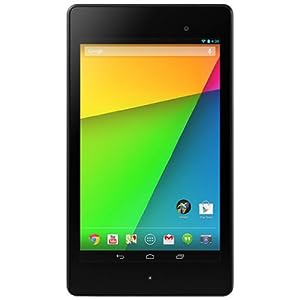 Google Nexus is a line of mobile devices co-developed by Google and several original equipment manufacturer partners, that run the Android operating system. Devices in the Nexus series do not have manufacturer or wireless carrier modifications to Android (such as custom graphical user interfaces), and have an unlockable bootloader to allow further development and end-user modification. Nexus devices are the first Android devices to receive updates to the operating system. The Galaxy Nexus is one of the few smartphones recommended by the Android Open Source Project for Android software development. As of October 2013, the latest devices in the series are the Nexus 5 phone by Google and LG Electronics, and the second-generation Nexus 7 tablet computer by Google and Asus.